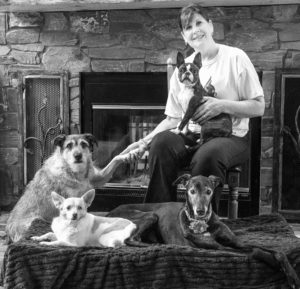 Bilinda is the owner Tarakru Whippets. Originally from Ontario, She has been working with dogs and horses for over 35 years. She grew up in Ontario and has lived in Alberta since 1999.

Bilinda worked at the Edmonton Humane Society for ten years managing operations and then focusing on behaviour and training for the public. In her career, she has been fortunate to earn many awards and is honoured to have been recognized for her efforts with the rescue animals during Hurricane Katrina and Rita, featured on Alberta Prime Time and featured in Animal Sheltering magazine. She was a member of the City of Edmonton’s Animal Control Advisory board and holds membership in the CKC, CAPPDT as well as ALCA and AADC. She owned and operated a highly succesful business called K9 Misfits Training and Behaviour.  She has since retired and now owns an equine store called Horse & Rider.

Bilinda has completed her Applied Canine Behaviour Consultant (ADBC) studies with honours, as well as holding memberships in the Pet Professional Guild (PPG), Canadian Kennel Club (CKC) and CAPPDT. She is a certified Canine Good Neighbour Evaluator and assists many rescue groups, animal control facilities, veterinarians and shelters with her knowledge and modification programs.  She is a puppy culture breeder of registered Whippets. (Tarakru Whippets.)

She owned and operated a highly succesful business called K9 Misfits Training and Behaviour.  She has since retired and now owns an equine store called Horse & Rider.

Tarakru Whippets believes in behavioural canine science. This means we raise our puppies with learning experiences that are safe and effective for a confident Whippet. Keep an eye on our Facebook💻 page for more information!